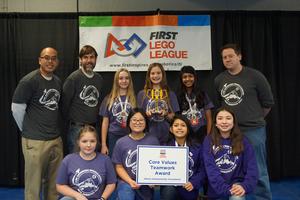 Seven talented 6th grade girls from Carl Sandburg -  the robotics team known as Gamma - have been honored with an invitation to compete this spring at the FIRST LEGO League Razorback World Invitational at the University of Arkansas from May 16-19!   One of the three robotics teams from the middle school and the first ever to be invited to go to a national competition, Gamma’s members are: Mari Hoover, Lia Kagan, Leah Kim, Sara Choi, Lucy Heikes, Sreya Kannappan, and Guadalupe Mayoral.  Head coach Mr. Bret Anno, a D75 parent, along with assistant coaches, teacher Eugene Skura and parent Scott Vandemotter, also deserve kudos.  “The entire Sandburg Community is proud of your work and accomplishments,”  says principal Mark Pilut in recognition of the great effort put forth by the group. Click for more information on how you can support their efforts!

At the local qualifier this season Gamma won for  "Best Robot Design" and then advanced to the state championships in Elgin where they earned the "Best Teamwork" award.  At the Razorback World Invitational, they will represent Illinois in competition against 70 other top robotics teams from around the country and the world - China, Korea, and Brazil to name a few!  Tony Cho, Project Challenge Coordinator and District LEGO Robotics Mentor/Organizer sums up this accomplishment as follows: “The theme for FIRST LEGO League this year was called ‘Into Orbit.’ Since August, all teams have been working hard on building and programming a robot to solve space-themed missions on a challenge board.  At the same time, we researched together, with the aid of local scientists, teachers, and engineers, to develop an innovative solution that would protect astronauts from cosmic radiation when traveling through space. Now, we are ready to show what a team of girls can do in engineering and coding to all of the teams at the Razorback Tournament!”

In order for the LEGO Robotics team to attend in Arkansas, they need to raise $10,000 for the tournament registration, travel costs, and lodging.   A GoFundMe page has been made to help cover some of the costs. They are also planning a Space Jam dance, a dinner, or an ice cream social to help raise funds.