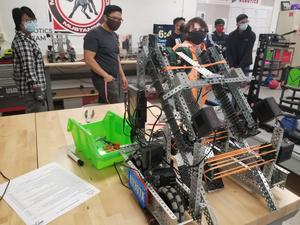 Due to COVID-19, robotics competitions around the world are being held virtually. In a  tournament hosted by the University of Alabama, two robotics teams from Carl Sandburg ranked second and third in state.

For the tournament, students built a robot to drive in a 12 x 12 ft competitive field mat. Baskets and various colored balls are located throughout the field mat. In one minute, the robot must pick up certain colored balls and drop them in different baskets for points.

Until the next tournament, students will continue improving and preparing their robot for various challenges.

Carl Sandburg has a total of four VEX teams, the other two robotics teams will compete in February.