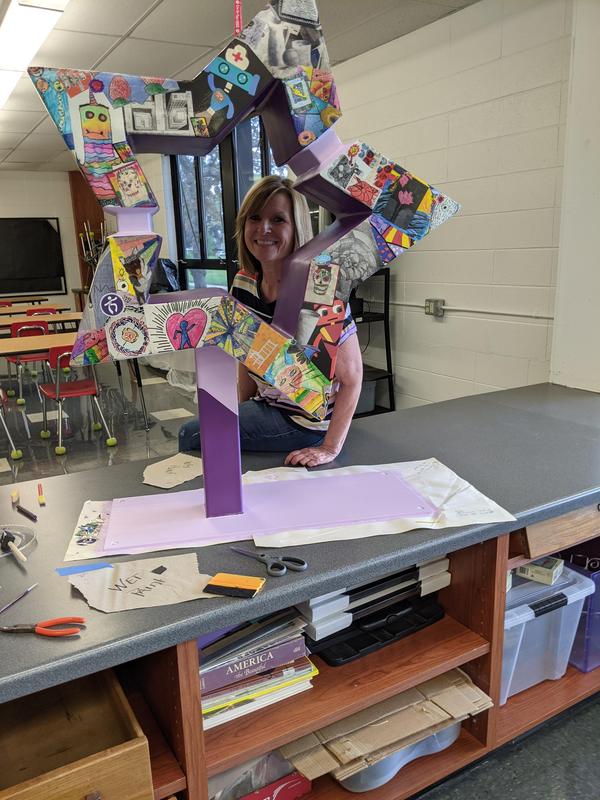 During the 2020 school year, the Mundelein Arts Commission (MAC) began their Stars on Parade art installation series - embellished sculptures of the Mundelein star logo.  Interested artists have been recruited to decorate/paint the metal and plaster fixtures. The pieces are then "adopted" by local businesses and organizations, and then placed outdoors at various places in the Mundelein downtown area.

Patience Bertana, former Instructional Technology Coach at Mundelein Elementary  District 75, originally wrote the proposal for this project.  She also recruited the aid of the three visual arts teachers in the district to collaborate on the project with her: Lisa Shirley, Carl Sandburg Middle School; Tracy Eifert, Mechanics Grove School, and Jen Savone, Washington Elementary School.  The accepted proposal was to create a collaged piece, “highlighting the growth of student artists within the district” through multiple school artwork images.

Due to unforeseen circumstances Bertana was not able to continue work on the project and the lead was taken over by Shirley. Shirley spent many hours working with a local printing business, Signal Graphics, to reproduce the artwork images onto a vinyl adhesive product, and also to paint and collage the star cast.  Her fellow art teachers provided many pieces of student artwork and were available for artistic process feedback every step of the way.  (Lincoln Preschool teachers also contributed images of student art.)

“The visually appealing and spectacular star outcome, named Many a Masterpiece and sponsored by Mundelein Elementary School District #75, will be stationed at a downtown location in the next couple weeks,” Shirley concluded.

“We are so pleased that the hardworking members of the Mundelein Arts Commission have brought this wonderful idea to Mundelein. This is a great way to beautify the Village with public art,” said Mundelein Mayor Steve Lentz when the project was launched.

A number of other stars are also in place at various downtown locations.